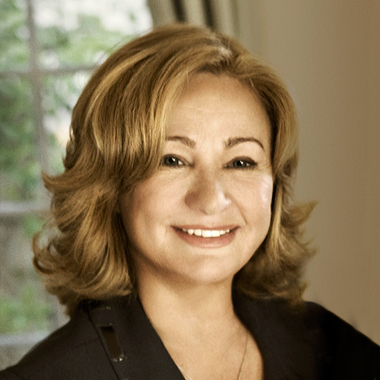 Over four decades ago, Karen and her husband, Rav Berg, set out to make Kabbalah understandable and relevant to all people. Their goal was to teach the spiritual wisdom and tools of Kabbalah, without exclusion. They believed that learning Kabbalah could help people make their lives better, and by doing so the world would benefit.

Under their leadership, The Kabbalah Centre grew from a single location into one of the world's leading sources of spiritual wisdom, with more than 40 Centres around the globe. The Kabbalah Centre provides instruction and community to tens of thousands of students through books, classes, one-on-one learning, spiritual trips, and spiritual connections online and at physical brick and mortar locations.

As the Founder of The Kabbalah Centre, Karen Berg was devoted to an enduring vision— within each person is a spark of God that can be bound together to create transcendence beyond all differences.

Karen was certain that peace is possible and foresaw a world free of hatred and intolerance. She worked untiringly to cultivate a new paradigm of Global Spirituality through which people from diverse beliefs and no beliefs at all can work together to bring the world to a better place through mutual respect, dignity, and love for humanity.

To this end, Karen:

Created the international children's program Spirituality for Kids, an online children's educational program that supports children to find the spark of Light within themselves, within others, and within all things.

Founded Kids Creating Peace (KCP), a program designed to help children discover for themselves a place of peaceful coexistence in the Middle East. For the International Day of Peace in 2010, teenage KCP participants were invited to make a presentation on behalf of peace in the Middle East to the French National Assembly. In 2014, teenage KCP representatives attended the United Nations Youth Assembly at the UN in New York City, where Karen gave the keynote address.

Discussed human dignity and peace with many spiritual leaders including: His Holiness the Dalai Lama; Sri Sri Ravi Shankar, founder of the Art of Living Centres; Imam Mohammed Ali Elahi, spiritual leader of the Islamic House of Wisdom; Michael Bernard Beckwith, founder and CEO of the Agape Centre International; Bawa Jain, Secretary-General of the Millennium World Council of Religious Leaders; Mabel Katz, authority on the ancient Hawaiian healing method, Ho'oponopono; and Ilchi Lee, founder and developer of Brain Education and Dahn Yoga. Karen has also spoken with political and thought leaders including: President Mahmoud Abbas of the Palestinian National Authority; Hilary Rantisi, director of the Middle East Initiative at Harvard University. In London in 2011, Karen spoke alongside Dr. Jehan Sadat, human rights activist and widow of former Egyptian President Anwar Sadat, and later that year, hosted an event in honor of International Women's Day with Ibtisam Mahameed, co-founder of the Women's Interfaith Encounter, and Professor Galia Sabar, chair of African Studies at Tel Aviv University, both recipients of the Dalai Lama Peace Prize.

Authored four groundbreaking works: Finding the Light Through the Darkness: Inspirational Lessons Rooted in the Bible and the Zohar; Simple Light: Wisdom from a Woman's Heart; To Be Continued: Reincarnation and the Purpose of our Lives; and Karen's first and most revolutionary title, God Wears Lipstick: Kabbalah for Women.

Launched her own official web site, KarenBerg.com, where students can learn more about Karen's vision of Global Spirituality.

On July 30th of 2020, Karen Berg passed on from this world. In our study of Kabbalah we learn that a righteous soul's passing is actually a joyous occasion, for their soul had accomplished what it came to this world to do; it has now moved on to the supernal realm where it becomes a powerful channel of Light for those of us still in this physical world. As anyone who has ever met her can attest, Karen was fierce, powerful, gentle and kind; a true being of sharing with a loving soul. Dedicated to a life of helping others, she helped countless people transform their lives. Her son, Michael Berg, along with his wife, Monica, are committed to continuing in her giant footsteps to bring Kabbalah to more people and regions than ever before.

"I believe the work is in Global Spirituality, bringing to the fore the vision that we were never meant to be of one nation, one language, or one religion; rather, we were meant to be diverse, but united as one." – Karen Berg

The Wisdom of the Heart
Karen Berg
March 4, 2021
Kabbalah.com Membership