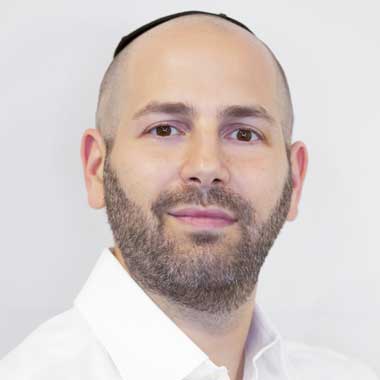 Originally from Israel and growing up in Germany, Daniel’s parents introduced him to Kabbalah at a young age when the family traveled to Paris for a Kabbalah Centre event. The warmth and love that he felt within the Centre’s community inspired Daniel to study books and tapes on his own, and before long he began to see positive changes in himself and his family. Sensing that his true calling was teaching the wisdom of Kabbalah, Daniel became a full-time teacher in 2004 at the London Centre.

With a clear and uplifting method of teaching, Daniel strives to inspire students by showing them their inner greatness, imparting in them a greater desire and urgency to reach their full potential. He has touched the lives of thousands of people worldwide, having managed study groups in Europe and all over the USA. He currently teaches at the Los Angeles Centre where he lives with his wife, Esther, and 2 daughters.

Daniel is grateful for the Centre’s global community and environment – one in which he can spiritually work on himself and at the same time guide others along the path to ending pain and suffering in the world.

Currently, Daniel is mostly involved in helping people identify their limiting beliefs and turning them around through his one-on-one Tikkune Healing Session that he is offering for students all around the world via Zoom.

Live Your Best Year
Creating A Better World Through A Better You
February 16, 2021