We're All In This Together

We're All In This Together 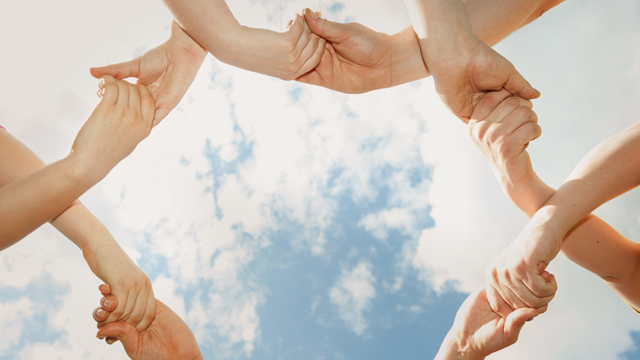 One of the most important teachings of Rav Ashlag, the founder of The Kabbalah Centre, is that the only way we can develop is by having people around us who both teach us and who we teach. This concept of having responsibility for each other is not simply just a “nice” thing, though. In fact, he teaches that the only way for us to develop spiritually in the way that we're meant to is by living within a community that both pushes us to grow and also receives assistance from us in its own growth. And if we’re not living this way then we actually suffer because we receive diminished Light.

Kabbalah explains that every individual in his spiritual growth goes through three stages which are compared to three stages in physical growth: when he is in the womb, after he is born but not yet capable to manifest things, and when he has attained the ability to manifest. Everything as it becomes manifest in our world goes through these three stages. However, in the spiritual state – unlike in a physical state -these three phases can go backwards or forwards.

Every soul has these three states and can go backwards or forwards through them depending on the level of elevation of the people of their community. The Creator infuses the leader of these groups with wisdom based on the spiritual level of the people. So, for example, with the story of the Golden Calf, because the Israelites fell and no longer had the ability to receive Light and wisdom from Moses, Moses himself regressed into a lower spiritual state and lost the Light that he had before. He was only able to have the Light that relates to the lowest of the three stages of growth, because that was the level that the Israelites had.

Our relationship both with those who give to us and those who receive from us is what influences how much Light and wisdom we receive. So, if we do something that makes it so that we do not warrant receiving the wisdom, physical, or spiritual sustenance that was meant for us, we also make it so that those who were meant to give those things to us also lose wisdom, physical, or spiritual sustenance. It is a snowball effect.

Let’s say that you're meant to receive money from somebody. If you act in selfish ways that make it so that you no longer have the capability to receive that money, you are also making it so that the person who was meant to be the conduit for you to receive the money will lose a certain amount of his own money. This is true not only about money, but with regards to all blessings that are intended for us and others!

We're meant to live within a spiritual community. We affect everyone in it, including those who are meant to give to us. And if they have diminished Light because they weren’t able to give to us, then of course we receive diminished Light, and that cycle continues. It's true that every time we give into our ego and selfish desires, the Light of somebody in our spiritual system - it could be family, friend, teacher, or student – is being diminished by our selfishness as well.

Start paying attention to the interrelation you have with every single person you encounter. Everyone you find yourself surrounded by in your spiritual and physical community is meant to either be giving to you or receiving from you. Remember that when you fall, even in the smallest ways, you are not only robbing yourself of Light and blessings, but also robbing those who are meant to both receive from you and give to you some of their blessings.