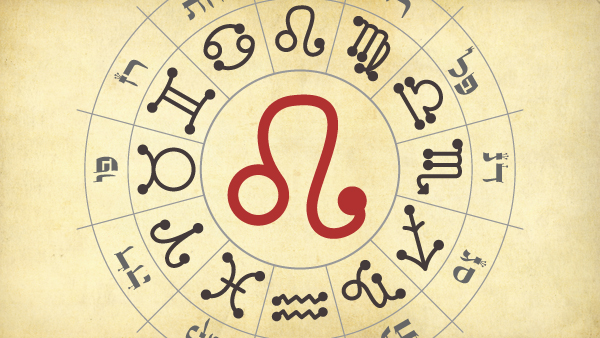 Leo is ruled by the sun, and is the Left Column of the fire signs. This indicates an added influence of fire, which is expressed as judgments - burning and consuming fire with no balance. This is the reason we experience a polarity of events, some negative and some positive. The Book of Formation says the letter Tet created Leo and the letter Caf created the sun. Together we get the energetic combination that controls the month of Leo.

At the center of our solar system, the sun brings each of the planets light and heat, without which organic life could not exist.

People born in this month are infamous for behaving like the sun. Their trademarks are leadership, determination, domination and power, and in full force, this combination can lead to the pitfalls of ego and pride. Leos easily take on leadership positions. But we must remember, the only control we have is self-control. Any feelings of ego, pride and superiority only prevent us from helping others.

The month of Leo is known for the massive occurrences of negativity that have transpired throughout history during this time; the Destruction of both Holy Temples in Jerusalem took place on the ninth of Leo. The systematic massacre of the Jews by Hitler’s Nazi regime was also ordered during Leo.

The number nine, represented by the Hebrew letter Tet, connects us to the Sefirah Yesod, which manifests all of the energy that is gathered from all the upper luminous emanations. Jerusalem was and remains the energy center of the world. When the people of Israel, and the residents of Jerusalem specifically, chose not to behave with human dignity toward one another - this energy was created and accumulated in Yesod - it had to manifest itself, and did so in an explosion of negativity on the ninth day of Leo, in a deadly short circuit.

The ninth day of Leo is a fasting day, not because the two Temples were destroyed, but because it is a day that lends itself to calamity. The culmination of negative energy created by a lack of unity and human dignity between people accumulates and manifests on the ninth of Leo. What is the solution? A change of consciousness and behavior. It is very easy to point fingers and blame others, but it is harder to transform oneself and change one's attitude, be patient, forgiving, and loving. If each of us could perceive ourselves as though we were ticking time bombs, and any self-serving action would trigger the fuse, we would be much more careful with our actions and words. Where there is the greatest darkness, therein also lies the biggest potential to reveal tremendous Light, but it all depends on our actions.

To lessen the judgment of this month we also have two very positive events:

THE FIFTH DAY OF AV - the death anniversary of Rav Isaac Luria (the Ari). He chose to leave the world on the fifth day - which represents the luminous emanation of Hod - in order to transform daveh (poor and weak).The death of the Ari, which does not represent a physical death, provides us with an opening for Light that we can connect to by studying his writings on that night.

FIFTEENTH DAY OF AV - the happiest day of the year. On this day, both the sun and the moon are full. The sun - Zeir Anpin, the positive pole – represents the male aspect of our universe. The moon - Malchut, the negative pole – represents the female aspect of the universe. When the moon reflects the light of the sun, we receive this power to return Light, the strength to give, to care, and to love unconditionally. This is why our sages stated that there is no happier day in the year, and this rare cosmic opportunity allows us to find our soul mate. The same way the sun and the moon are in harmony on this day, so too can we draw this partnership to our lives.

GUIDE TO THE MONTH OF LEO

The energy of each month affects all of us alike – whether or not we were born under that particular sign. And as we are now entering the month of Leo, we’d like to help you see how Leo will affect you and show you what you can do to use this energy to your advantage.

Negatives Qualities (and how to transform them):

Prideful
Ask the Light for help to control the ego, work on being a stronger vessel for the Light, not for selfish desires

Control freak
Use strengths to help others, not dominate them

Needs to be the center of attention
Understand you are not the center of the universe - only the Light knows best. The Light is everywhere, all the time, so it’s important to listen to others.

Lacks sensitivity
Ask for help to understand the pain and needs of others. Go beyond your own desires.

Self-centered
Be more empathetic, try to understand others’ perspective

Susceptible to flattery
Understand that talents are given by the Light to be used for the Light. They are not earned or deserved.

Generous, as long as they are recognized as the giver
Give in order to help others in their spiritual path, not in order to satisfy your own ego

Lacks diplomacy
Think before speaking. Be sensitive to other person’s feelings.

How to improve relationships with a Leo:

How a Leo will find fulfillment:
Giving purely for the sake of sharing