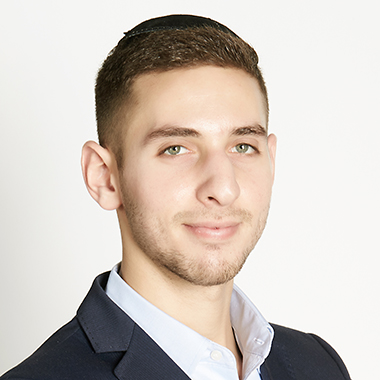 Yosef has been immersed in the wisdom of Kabbalah since he was a small child. Born in Toronto, Canada, his diverse participation in The Kabbalah Centre has taken him all over the world, giving him a global view that inspires his efforts to unify people.

Yosef knew he wanted to become a Kabbalah Centre teacher while still in high school. He would visit his brother, David – who was a chevre at the Miami Centre – every summer to study and volunteer. Drawn to the Rav and Karen Berg’s relentless efforts to awaken consciousness in the world, Yosef committed himself to becoming a Centre teacher, a goal he achieved in 2015.

As one of the new generation of Kabbalah Centre teachers, Yosef brings an interactive sensibility to his teaching style. He strives to make this dense, ancient study clear and concise, while also maintaining sensitivity to his students’ needs. Yosef’s many jobs and responsibilities at different Kabbalah Centres around the globe inform his easy interactions with students. He has worked at the Miami, Los Angeles, and Brazil locations.

Inspired by the Rav and Karen’s ability to love unconditionally, Yosef envisions a world in which people find the beauty in each other, celebrating not only their similarities but also their differences. He believes Kabbalah expands understanding and that wisdom will bring peace and harmony to the world. Yosef currently lives in New York City, where in addition to teaching he manages the Kabbalah One and Teen Departments.

Being a Positive Influence in the World
Yosef Grundman
Junio 7, 2022
Kabbalah.com Membresía

The Spiritual Work is Different for Everyone
Yosef Grundman
Febrero 22, 2022
Kabbalah.com Membresía

Live Your Best Year
Creating A Better World Through A Better You
Febrero 16, 2021