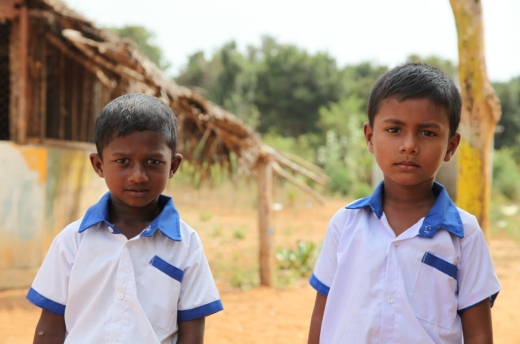 A nearly thirty-year war in Sri Lanka left Rasina and her family huddled in a temporary shelter made from sticks.

With six people in such a small space, there was no privacy and little protection from the elements. Snakes and scorpions were regular visitors. Rasina lived in constant fear that her children would be bitten or fall ill due to the flooding during monsoon season. Hundreds of families faced the same challenges upon returning to Sannar Village after years of being displaced by the civil conflict.

That’s why, beginning in 2013, Kabbalah Centre Charitable Causes (KCCC) committed to bringing housing and humanitarian aid to families like Rasina’s.

KCCC is the charitable giving program of The Kabbalah Centre, dedicated to providing humanitarian aid to people in need in partnership with other non-profit organization. Our mission is not only to lead these individuals out of darkness, but also to give Kabbalah Centre students the opportunity to light the way.

Partnering with Habitat for Humanity, KCCC identified 100 Sri Lankan families – 50 Muslim and 50 Hindu – who were in desperate need of secure shelter. Many beneficiaries had been living as refugees for years and not only did they assist with the construction of their own new homes, but they helped to build their neighbors’ too.

The construction in Sannar Village was completed in the summer of 2016 with the giving over of 100 permanent shelters, 23 tube wells, and 10 water tanks. Through financial support from our donors, 100 children were given education kits, and their families received agro-based livelihood support. Now school attendance is up and papaya cultivation is once again on the rise.

With a safe home comes new hope. Rasina now has a sewing room, and takes on orders to supplement the family income. Her children, Vidhushan and Kamsiga, sleep peacefully, protected from the rain and snakes. “We would not have been able to do this in our lifetime,” Rasina says, “if not for the help we received.”

On behalf of Rasina and all the villagers in Sannar, we’d like to say thank you to our generous donors. Your support is changing lives around the world in meaningful and measurable ways.