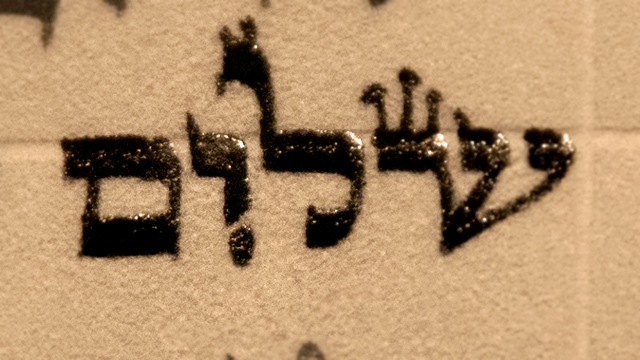 As we begin our spiritual journey in the study of Kabbalah, we learn that most of the time we are caught up in the illusion of the 5 senses and the falsehoods of the 1% physical universe – as taught and reinforced by the opponent. This is the source of all of the chaos and unhappiness that we experience in life.

To break free from the chaos of the opponent’s illusion, great effort, focus of mind, and use of spiritual tools is required. Kabbalah gives us the technology to achieve this freedom, guiding us into the 99% reality where there is order, clarity, peace and fulfillment.

So often what holds us back in life are the rules that we are taught, beginning in our childhood. Our parents teach us the do’s and don’t’s of the family; at school we learn there are things we are allowed to do and others we are not. Our friends tell us the rules of relationships, our bosses or coworkers tell us the rules of the job.

Everywhere we go there are rules, rules, and more rules.

Pinchas was a rule breaker! And he was rewarded with eternal blessings! It sounds really good, doesn’t it? I’m sure you are already imagining all the things you would do if you were to break the rules.

Pinchas did such a good job that even in the Torah scroll there are broken rules. In the Torah scroll, every letter must be handwritten and perfectly formed or the scroll is not valid, meaning the Light energy will not flow. In the portion of Pinchas, it is required that one letter be broken in half as written, or the scroll is not valid. This is against the rule that each letter must be complete in form. The broken letter is in the word ‘shalom’, which means ‘peace’. There is also a blank space after the word ‘plague’ in the middle of a sentence, which doesn’t happen anywhere else.

There are a number of other aspects to this portion that make it Rav Berg’s favorite: all of the cosmic events of the year are mentioned, there is an unusual small letter ‘yud’ written in, and the entire 12 signs of the zodiac are infused in this portion through the 12 tribes of Jacob.

Each and every one of these facets of the portion of Pinchas is extremely powerful and beneficial to us in support of our spiritual transformation.

Why does so much appear in the portion of Pinchas? Let’s look at Pinchas and his actions.

Pinchas was relatively unknown, a quiet man who was often in the background. He was the grandson of Aaron the High Priest. Then came the event of Cosby and Zimri – two people that started an action that begat an environment of such negativity that it created a plague, which killed many people and threatened the very existence and survival of the entire Israelite nation. No one was taking action to halt the process. Then along came Pinchas and did what he had to do to stop the death and destruction: he killed the two people that started the plague. He was willing to lose his life – as a righteous man committing a condemned 1% act, he was risking death – to save the other people from dying, and save the Israelite nation’s future. Because of his sacrifice, because he thought about helping others without concern for himself, because he was willing to express the Lightforce within him to that highest degree of self-sacrifice, he DID save the nation and its future, AND received eternal priesthood and many, many other blessings.

That is the power, strength and support we want to receive from this reading. A few of the other aspects that we can derive greater strength and fortitude from, in order to achieve our spiritual potential, are:

There is so much more within this powerful portion that we don’t have the space to go in depth about here, so I refer you to the Book of Numbers volume of the Kabbalistic Bible to read more details about the portion from the Rav and Yehuda Berg.

I want you to derive the greatest benefit from this powerful reading, so I advise you to think about how you are trapped in the rules of the 1%. Meditate on where you are looking for the easy way out, where you stand back and let other people do the work, how you justify to yourself why you are not changing and how your desire for the approval of others is holding you back from expressing your true spiritual nature.

Use the power of the reading of Pinchas to empower your self-sacrifice – sacrificing your ego, your reactivity, your chaos, for the sake of standing up to do the actions of sharing, caring and loving others, regardless of what else may be on your plate.

The larger the vessel you bring to Shabbat Pinchas, the more Light you will be able to embody from the Torah reading. Therefore, begin taking actions today to break the rules of the opponent and the 1%. Implement instead the rules of the Light, the rules of the 99% that we learn in the Centre. Go against your 1% nature and care about someone in your office as a human being, not just as a coworker. Share something with someone from whom you usually receive things. Be loving to someone that you hold resentment or feelings of hurt towards. Speak to your teacher or contact the Kabbalah Centre and ask how you can share more and support the various projects of the Centre for the removal of chaos, pain and suffering from all of humanity.

Become, today, like Pinchas the rule breaker and let your blessings and Light from those actions give you eternal fulfillment.